Why So Pale and Wan: Comparative Genomics of a New Cavefish in Europe

Cavefish are found in hostile subterranean environments lacking light and nutrition. Their adaptation to such habitats make them excellent models to study the evolution of corresponding traits in vertebrates. A recently discovered population of loaches (Barbatula sp.) from the Aach Cave in Germany represents the first cavefish in Europe and the northernmost cavefish worldwide. Cave Barbatula are highly exciting study subjects because they are evolutionarily young and because they evolved independently from the Mexican cavefish (A. mexicanus), a model organism in developmental biology. Most interestingly, this cavefish split from the surface population only around 12,000-15,000 years ago making it one of the youngest cavefish that already shows adoption.

Together with PacBio® and GENEWIZ, we sequenced the genome and assembled it to a diploid representation using Falcon Unzip. This genome assembly allows us to (i) identify genetic variants associated with the evolution of cavefish including the lack of vision, pale pigmentation, changes in their senses of taste and touch, and metabolism, (ii) generalize insights on the published Mexican cavefish data in high-impact journals, and (iii) facilitate a series of studies on the diversity of Barbatula and the emergence of a very young cavefish. We furthermore sequenced the transcriptome of the same fish allowing a detailed analysis of the different isoforms. 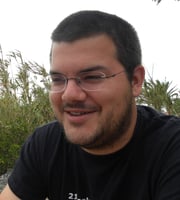 Dr. Fritz Sedlazeck completed his Ph.D. in 2012 in the group of Dr. Arndt von Haeseler at the Max F. Perutz Laboratory in Vienna. After a two-year postdoc, he transitioned to the lab of Dr. Michael Schatz at Cold Spring Harbor Laboratory, and later to Johns Hopkins University. Since 2017, he has been leading his own group at the Human Genome Sequencing Center at Baylor College of Medicine. His research focuses on developing computational methods to detect and analyze genomic variations with a focus on Structural Variations. Structural Variations are genomic events that manipulate multiple positions in a genome which impact evolution, genomic disorders, regulation, and play an important role in explaining multiple phenotypes. He and his group are working on very fine-scaled applications to detect variations that can explain certain disease phenotypes, as well as large population-scale applications to deepen our knowledge of Structural Variations.