An elegant model for the conversion of an autosomal pair in a hermaphroditic species to a sex chromosome in a dioecious species was formalized by Deborah and Brian Charlesworth in 1978. Briefly, the conversion from autosome to sex chromosome could require just two loci linked perfectly in non-recombination on a Y chromosome: one locus must dominantly suppress female (pistil) organogenesis, while another locus must promote the formation of male (anther) organogenesis, but this model has never had strong genic support in any dioecious species. This can be tested using everyday garden asparagus, due to its evolutionarily young and cytologically homomorphic X and Y sex chromosomes. Using next generation sequencing techniques and Bionano optical maps, we identified a 1Mb region of non-recombination on the Y chromosome, but also found that a large part of this region did not exist on the X chromosome. In this webinar, Harkess will further discuss his findings and the implications for Charlesworth’s “two gene” model. 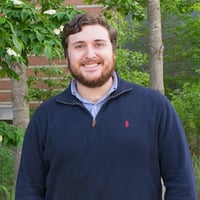 Alex Harkess is a National Science Foundation Plant Genome Initiative postdoctoral fellow with Dr. Blake Meyers at the Donald Danforth Plant Science Center in St. Louis, Missouri. He focuses on comparative genomics and small RNA evolution across land plants. He completed his Ph.D. in Plant Biology at University of Georgia, where he focused on sex chromosomes and the evolution of plant sex, among other fascinating topics. For GENEWIZ WEEK, Alex will discuss his research in sex chromosomes in asparagus and the ways in which it relates to the evolution of separate X and Y chromosomes, which was published in Nature Communications in Fall 2017.

Fill Out the Form to Watch Webinar-On-Demand