Genetic incorporation of unnatural amino acids allows expansion of the chemical, physical, and biological properties of proteins and thereby of life itself. One possible way of expanding incorporation to several unnatural amino acids simultaneously is by synthesising a new genome with artificially re-defined decoding rules. This requires the de novo construction of a viable, synthetic, recoded genome, with a reduced number of codons. To facilitate the synthesis of a whole genome, we have developed an efficient, specific, and iterative method in E. coli to replace defined genomic fragments with synthetic DNA (replicon excision enhanced recombination, REXER). We have employed this method to empirically test several codon compression schemes in vivo and the method should allow replacement of the entire 4.6-Mb E. coli genome in around 15 or less iterated REXER steps.

Julius Fredens did his undergrad and Ph.D. at University of Southern Denmark where he developed a method for quantitative proteomics in C. elegans and used it to study regulation of metabolic pathways. After graduating, he joined Prof. Jason Chin’s lab at MRC LMB, first as postdoctoral fellow of the Danish Council for Independent Research and later as Lundbeck Foundation’s International Postdoc. Julius is working on genome synthesis and engineering in E. coli and beyond. 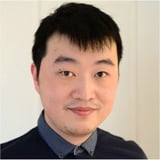 Kaihang Wang spent a year at Peking University before going to the UK to finish his undergraduate at University College London. He then did his PhD at MRC Laboratory of Molecular Biology (LMB) in Dr. Jason Chin’s lab expanding decoding capacity of orthogonal translation machineries. He became a Junior Research Fellow at Trinity College, Cambridge University after his Ph.D. graduation, then worked as a Career Development Fellow at LMB. He was promoted to Investigator Scientist and later on Senior Investigator Scientist at LMB while working on de novo genome synthesis and engineering in E. coli and beyond.