Advances in the first decade of the 2000s enabled not only edits to genes, but also to pathways. Synthetic biologists developed gene circuits to carry out sophisticated functions in cells such as the synthesis of complex molecules (artemisinin, erythromycin, etc.), or biosensing. Technological advances in gene synthesis and genome engineering have radically upgraded the scope of synthetic biology applications. Gene synthesis costs have dropped exponentially, and genetic engineering has flourished with a powerful repertoire of new technologies, including MAGE and CRISPR/cas9. These new tools have enabled researchers to address genome-wide properties which alter an organisms most fundamental features such as genetic code or trans-species differences. 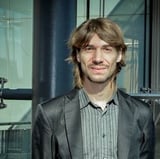 Marc Güell received Bachelor's degrees in Chemistry from Ramon Llull University and in Telecommunications Engineering from the Open University of Catalonia, and a Ph.D. in Biomedicine from Pompeu Fabra University, studying one of the simplest microorganisms, Mycoplasma pnemoniae, with unprecedented detail. He developed the first method for strand specific transcriptome genome-wide profiling, and generated the most comprehensive integrated quantitative dataset for a bacterium including proteomics and metabolomics. As EMBO and HFSP fellow in the laboratory of George Church, he focused on genome recoding, and in CRISPR based genome engineering. As Wyss Institute Technology Development Fellow, he focuses on synthetic systems to generate human compatible tissues, and to translate DNA diversity to small molecule diversity.